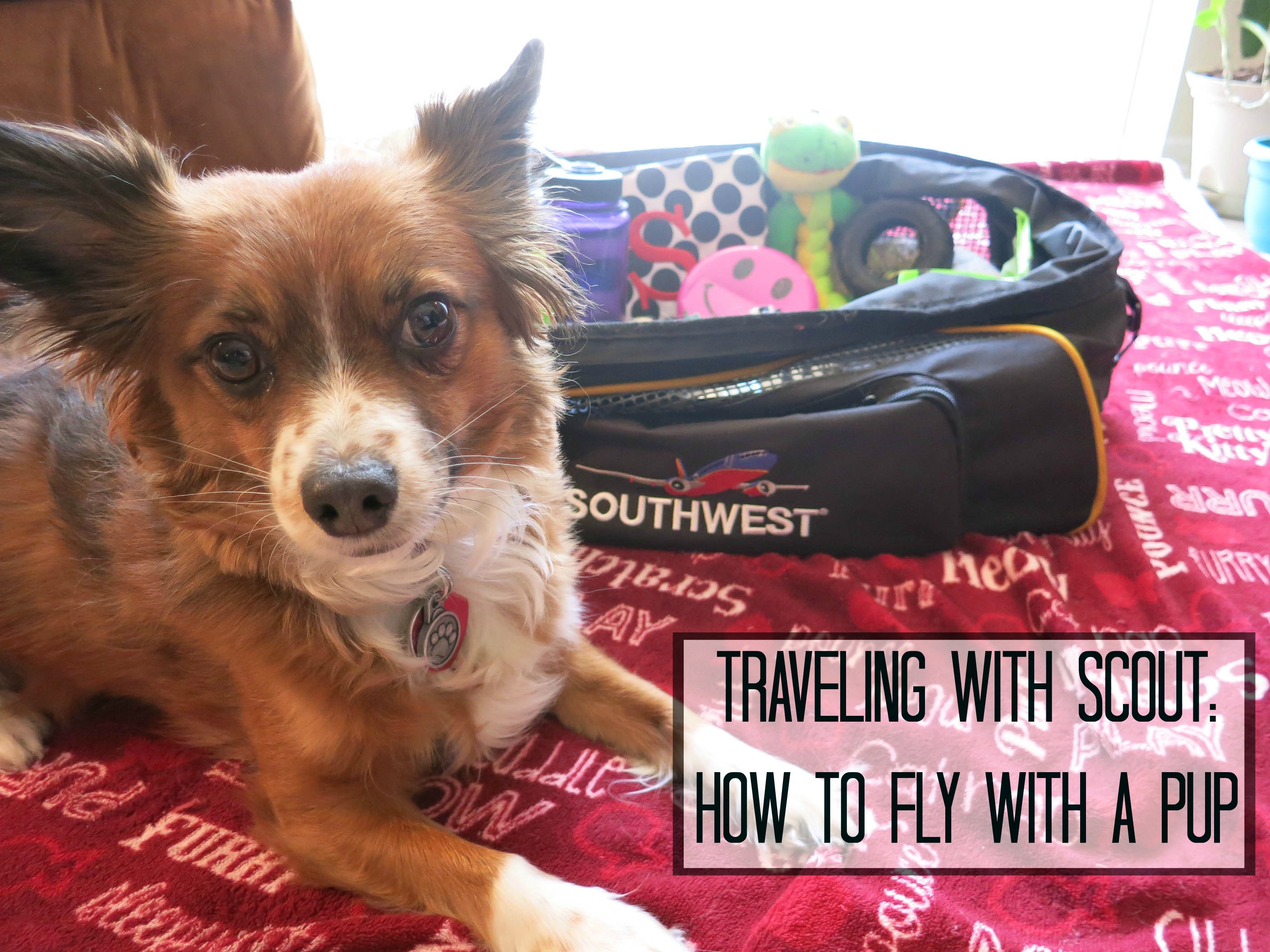 Scout and I are a package deal. Which translates into he goes where I go. Take that a step further, when I fly home to Colorado he’s going to be flying with me. My first trip home after moving out to California, I was a little bit stressed about the idea, to say the least. I had no idea how to fly with a pet.

So, I scoured the internet for what I should bring with me, what the regulations were, how did we go through security, which bag should I buy, etc, etc, etc. There were some helpful tips but mostly what I’ve learned is through good old trial and error. With all that being said, I’ve created this helpful guide to flying with your dog. I’m sure some of this can also apply to kitty cats but for now, I’ll stick with what I know. Warning: this is a long post but I hope you find it helpful!

The first question most people probably have (I know I did) is should I bring my dog on a plane? Followed by: what are the requirements for me to bring my dog?

Scout is a small 12-pound dog. He, therefore, can go under the seat in front of me. Larger dogs have to go into the cargo area. I’m not sure if I would feel comfortable with that. If you have a larger animal, that should factor into your decision-making.

The other piece to consider is if your dog is a nervous nelly, gets anxious easily, or is not generally friendly towards others. There are websites and people who recommend giving dogs a medicine that makes them drowsy. My vet told me that this could make them sick during the flight and that it’s better to not give it to small dogs who are more sensitive to medications. That’s up to you though.

Now, the requirements. I fly Southwest, always. For their requirements for animals on the plane, click here. There you will find how much it costs, requirements, and so on.

Here is a complete list of airlines that allow pets.

Okay, so you’ve decided to bring your pet with you on your trip. What do you bring? 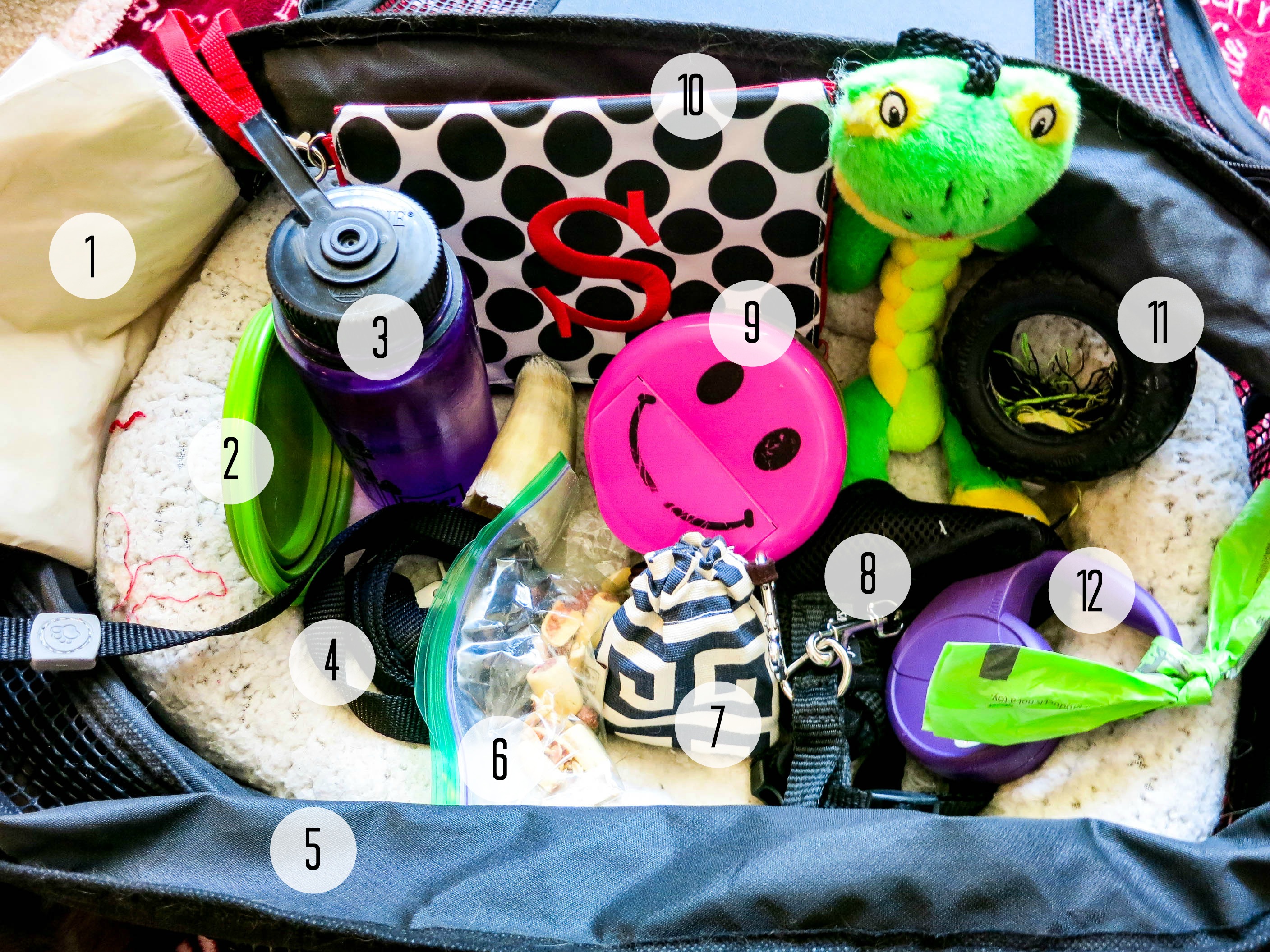 Sounds so glamorous but I always make sure I have one. Most airports have a pet relief station but in case they don’t, I have a place for him to go.

I have a couple of these because they’re so stinking handy. I monitor Scout’s water and food intake closely before we get on the plane so he doesn’t need to go to the bathroom and to minimize the risk of him getting sick in flight. It’s important to have the option though in case you get stuck somewhere. Which leads me to…

I bring a water bottle with me when I fly anyway but if you don’t it’s good to include it. You can always buy one at one of the stores once through security but I’d rather bring an empty one and fill it up at the water fountain.

This isn’t the leash I walk Scout with, actually. It is, however, the one I use in the car. I clip it to his harness and wrap it around the headrest so that he stays put.

There are a ton of these on the market. There are ones with all the bells and whistles and I’m sure they are great! I did a lot of research and settled on this one. It’s Southwest’s dog carrier. It unzips to create more room and it fits one of his dog beds perfectly. It also has a pocket on the front which I find really useful. Since Scout has to go under the seat in front of me, I have to carry anything I want with me. I always have a book and then this pocket fits my iPod and headphones, my cellphone, my driver’s license, and a credit card. It isn’t all that fancy but I wanted to know for sure there weren’t going to be any problems once we got there so I purchased theirs to stay on the safe side.

This one is a no-brainer. I take small treats that aren’t rich to ensure he doesn’t get sick in flight.

Another glamorous one. Very necessary for obvious reasons. Again, most airports have a relief station but better safe then getting nasty looks from travelers.

Scout is generally wearing this in case I need to set him down. He also is wearing his collar.

I’ve had this pink smiley faced container forever and it’s perfect for bringing a little dog food with me.

Sometimes I bring this, sometimes I don’t. Scout and I generally just use the collapsible bowl that is #2 on this list. Sometimes I bring it if I think I’ll need something multi-functional. It has a pocket, it unzips to create the bowl, and it has a place to put poop bags. It also has a handle so I can put it on my wrist which is nice for hikes or long walks. I generally take this with me if I think Scout and I are going to be doing more outdoor activities wherever we’re going.

Scout loves his toys. In fact, every night when we go to bed he has to bring a bedtime toy with him. Before I close the bedroom door, I’ll say “do you need a bedtime toy?” If he doesn’t already have one, he goes out and gets one. Needless to say, I bring toys. I bring some sort of bone that he can chew on which I put in his carrier with him. I also put his tire (his favorite) in his carrier. He also loves soft toys but I don’t put it in his carrier with him in case he decides to tear it up.

This is the leash I walk Scout with. It also has a poop bag tied to it. Never leave home without one!

Oh, and don’t forget the dog 😉 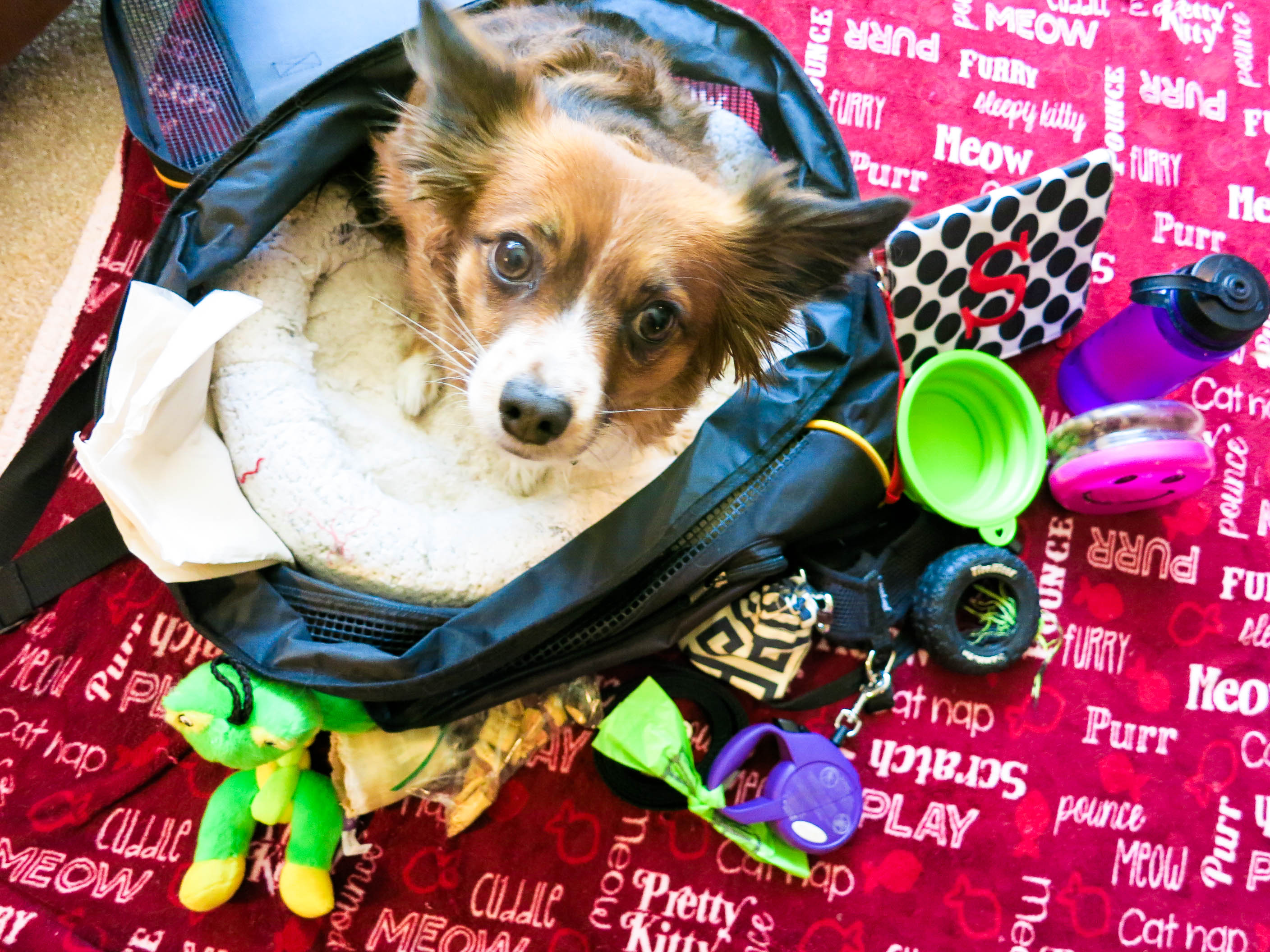 Other FYIs and Tips:

Through security, you have to carry your dog

You have to send their carrier through like you would any other carry on and you obviously keep your dog with you. They will have you go through a metal detector and then will check your hands for bomb residue.

So I generally wear my vans so I can slip them off easily and instead of wearing my sweatshirt, I put it in my backpack so I’m not having to peel off any layers. I don’t wear any jewelry but instead, put it in my backpack if I want to put it on when I land. I also take my credit card (that I will use to pay for Scout with) and my driver’s license out of my wallet and put them in the pocket of the carrier. Finally, the biggest help has been having a TSA KTN (Known Traveler Number) which gives us TSA pre every time.

I’ve never been on a flight that has reached the capacity of animals allowed but if you don’t and show up and the plane is at animal capacity, it’ll be a nightmare. This is a policy I know for Southwest but I would imagine it applies to other airlines.

On Southwest, there aren’t assigned seats, only sections. If I have a number that is further back I ask to board earlier since I’m traveling with an animal. It’s extremely helpful because you’re not trying to get over people to your seat while also carrying your animal in the crate.

NOTE: if you’re traveling with a pet you can not sit in the exit row

They say it’s because you have other priorities first so make sure to skip that aisle.

As a courtesy, tell the people next to you that you are traveling with an animal

I always say something along the lines of, “I just wanted to let you know that I have a dog with me.” Better to tell them right off the bat then to learn halfway through the flight that they’re allergic to dogs.

That way, he’s sitting in my lap and if he gets nervous, I can pet him and keep him calm. It also isn’t a bad idea to let your animal get used to the crate before you’re at the airport trying to put them in it. I generally gather Scout’s travel stuff on his blanket that sits in the living room. He knows it’s his stuff and I let him get used to it. When I pull the crate out, he knows we’re going somewhere. He always checks it out and sometimes brings me another toy. He’s too cute. 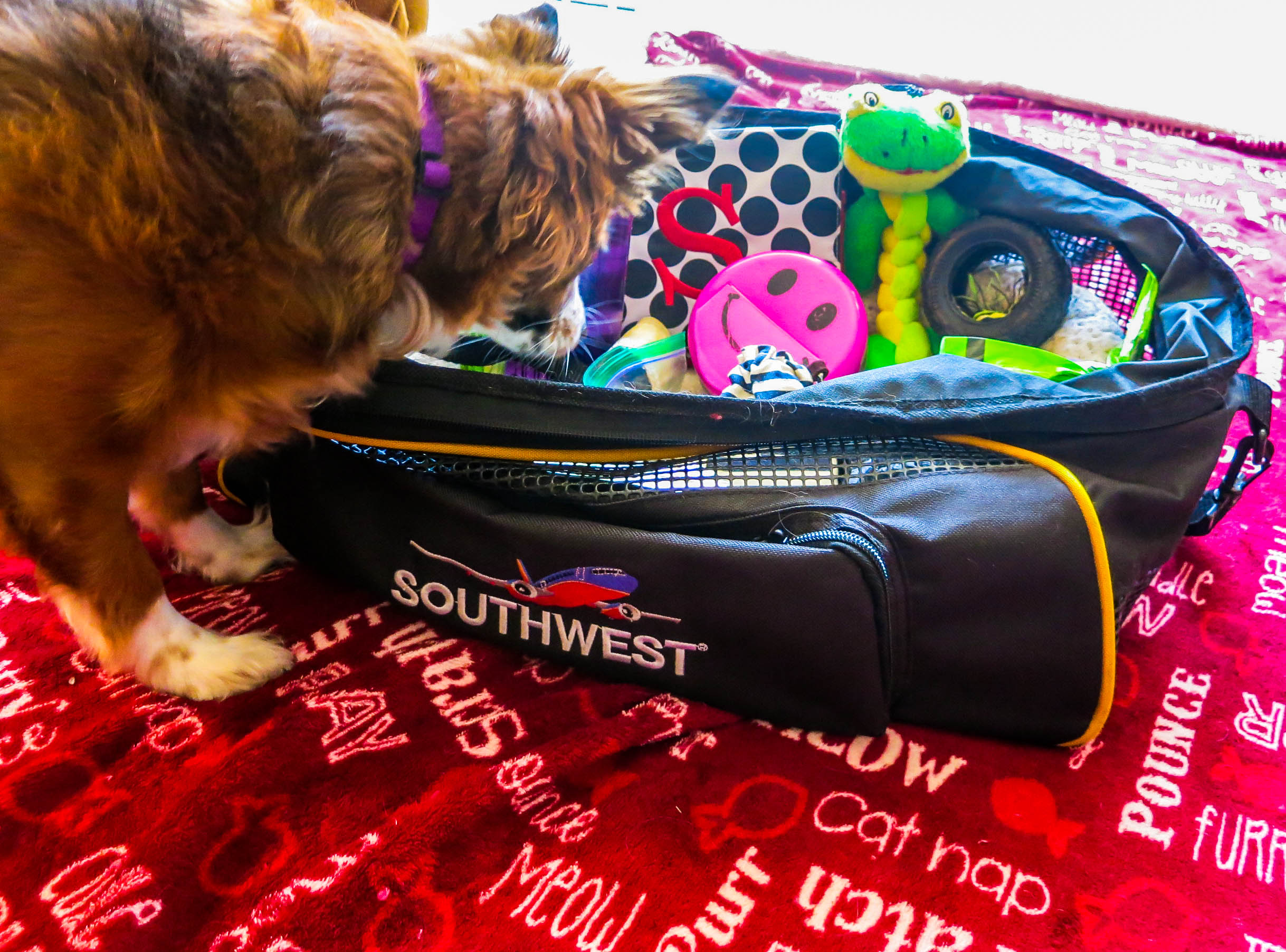 Just like I keep Scout out of his crate right up until I’m in line to board, I also take him out of his crate as soon as we’re off the plane. He’s getting a little anxious at this point and it’s easier to carry him like that anyhow. I also don’t set him down in the airport. He’s small and I don’t think people expect to see a dog in their path so I keep him close so he’s not in the way of luggage and people running to catch planes.

Scout sheds and when he’s nervous, it gets really bad. So I keep a lint roller with me in my backpack just in case I’m completely covered. If you’re busting out the lint roller, you’ve landed and made it through! Yay!

I know it seems like a lot and that’s because it is. But I know that for me, things seem a lot less daunting when I know exactly what to expect. It’s better if you learn from my mistakes – like wearing a sweater and having to take it off with one hand and not being able to so the very nice lady behind me has to help me get it off. Or wasting time taking Scout’s harness off and then having the TSA Agent tell me I could have left it on.

Even though it can be such a pain to get to the plane, it’s always worth it when my family gets to see him or when my brother’s dog (who happens to be Scout’s brother) sees him and they get so excited, it’s so worth it. Just plan it out, know what you’re in for, and in no time you’ll have a well-traveled pup!